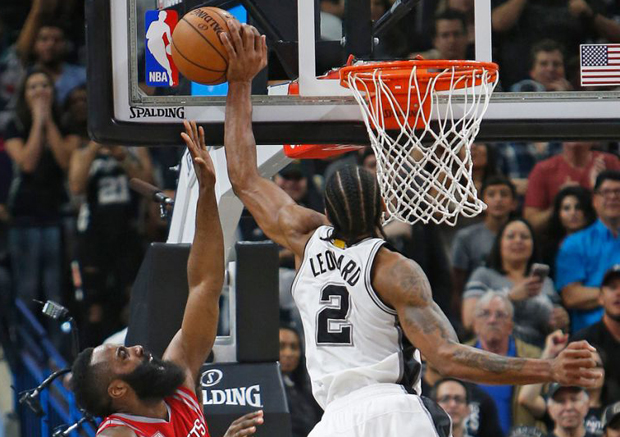 Roughly five seconds of game clock passed between Kawhi Leonard’s dagger three-pointer and his block last night. It was all he needed to push his name towards the front of the NBA MVP race.

With the Houston Rockets up 108-107 and time escaping the San Antonio Spurs, Leonard maneuvered for a straightaway triple from the top. The inbounds made its way to James Harden for a quick layup but Leonard, a two-time Defensive Player of the Year, pinned the basketball and preserved the Spurs’ win.

Leonard finished with 39 points in 39 minutes and moved the Spurs to just 2.5 games out of first place in the Western Conference. He’s currently averaging a career-high 26.3 points.

While fellow Jordan Brand athlete Russell Westbrook remains a clear MVP choice for averaging a triple double this season, Leonard’s true two-way game impact on the Spurs may make the race closer than expected. Watch Kawhi Leonard’s amazing sequence below and give us your thoughts on the NBA MVP field.