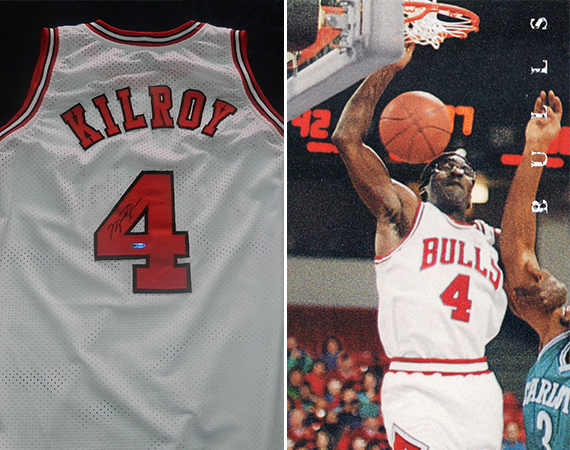 When Michael Jordan abruptly retired from basketball in 1993 after winning his third straight championship, many thought that it was the end of his Air Jordan line, but Nike continued on by hiring Steve Martin for some infamous commercials that had Michael Jordan cleverly disguised under aliases such as Calvin Bailey, Bentley Ellis and Johnny Kilroy – the latter of which would fictitiously check into a Bulls game in the 3rd quarter and score 73 points. Today’s vintage gear is from the Air Jordan IX era in the form of a Johnny Kilroy number 4 Bulls jersey signed by MJ. While Jordan would never wear the Air Jordan IX on court, his line did continue, and he would go on to return to the game of basketball merely a year after stepping away. Continue on to see all of the Kilroy commercials and bid on this rare find from felexxfoxx on eBay.