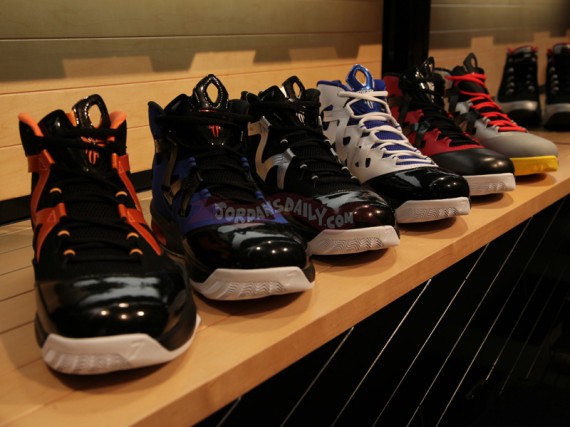 With just about a year and a half under our belts Jordans Daily has already gained the attention of the house that Michael built, being invited out this week to a special showing of upcoming Jordan Brand footwear and apparel out in NYC. During the media event we were able to touch bases with a few of the foremost thinkers at the brand in terms of design, chopping it up with the folks who have put their blood, sweat, and tears into creating the on-court designs for superstars like Carmelo Anthony and Chris Paul.

The former has quite a year ahead of him, with Melo coming off of a gold medal win and an impressive showing during the 2012 NBA Playoffs. Of course the minds at Jordan Brand are very much striking while the iron is hot, with two new sneakers waiting in the wings to outfit Anthony for the trials that the 2012-13 NBA season has in store. First is the Jordan Melo M8 advance, a stepping stone pair that bridges the gap between his eighth and ninth signature models with the brand. The innovative Hyperfuse equipped pair debuted at Olympics this year and will serve Melo for the start of the season (with another retail drop on tap for October 17th). After that it’s the Jordan Melo M9, multi-layered performance beast of a shoe featuring an Ironman armor suit inspired construction and a boat load of ‘energy’ colorways on the way.

Giving you a behind the scenes look at the next steps of the Jordan Melo line is this exclusive interview with Justin Taylor, the man behind much of the recent innovations in Carmelo Anthony’s signature line (and a host of other JB models as well). Click through with us to read the full piece and check out the detailed gallery of upcoming release and tech specs. 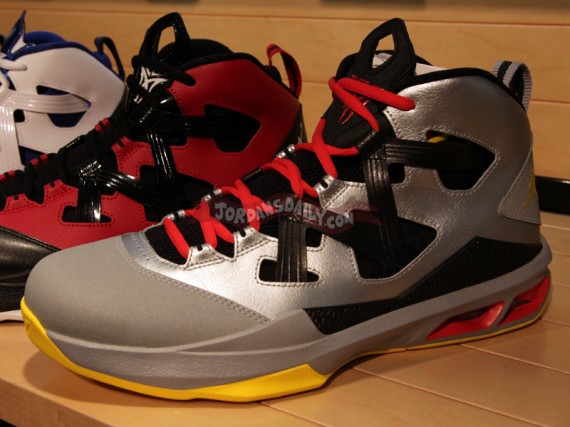 Jordans Daily: First of all could you introduced yourself to our readers so that have a bit of background as far as your design history with Jordan Brand?

Justin Taylor: Sure, my name is Justin Taylor I’ve been with Jordan Brand for six years this February and I’ve worked on the Melo line since the M6. I’ve also done several other shoes like the Alpha Trunner, Aero Flight, the Air Jordan 2012 Lite, and now most recently the the Jordan Melo M9.

JD: Alright, so the Advance approach debuted on the Melo M7 which sort of brought Flywire into the equation. What sort of new stuff does the Melo M8 Advance bring that parallels that this time around?

JT: Well what it brings is a Hyperfuse construction, which isn’t in itself revolutionary but for Melo it’s a new excursion. And the way that we incorporated it into the 4th layer to play off what the brand did on the original Jordan Melo M8 is sort of an evolution for him. So the M8 Advance became more of an evolutionary process for Melo, whereas with the M7 Advance we were looking to introduce Flywire to the brand cause we’d never used it, so even though Flywire wasn’t revolutionary at the time for the brand it was a step forward. So using the Fuse on this was a step forward for Melo, but now we’ve taken that and built on the way that shoe was constructed to do a couple more openings and all the articulation on the M9. So the Jordan Melo M8 is more of an evolution that kind of allows us to bridge the gap rather than a sneaker that introduces new materials or constructions for Melo specifically.