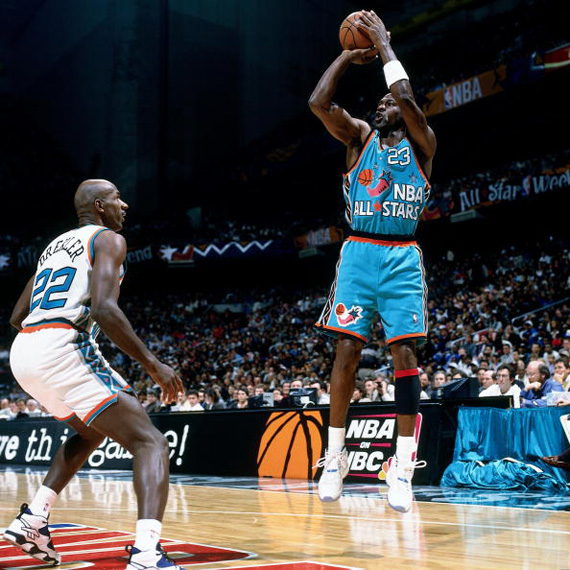 With NBA All-Star Weekend kicking off tomorrow night, we thought we’d take a look back at the event that Michael Jordan was a part of 14 times throughout his career. Michael’s first All-Star Game appearance came in 1985 in Indianapolis in what would be known as the “freeze out” game due to Isaiah Thomas’ jealousy toward the rookie sensation. The effects of said “freeze out” showed as Michael would only score 7 points on 2-9 shooting. Jordan would miss the 1986 festivities due to a foot injury that kept him sidelined for most of the season, but would come back with a vengeance in ’87 as he won the Slam Dunk Contest for the first time of his career. He would go on to capture his first All-Star Game MVP in 1988 in front of the hometown Chicago crowd in a dazzling display of showmanship by scoring 40 points and taking home the Slam Dunk Championship for the second year in a row. Michael would continue to put on a great show for the crowd until his last All-Star Game in 1993 in which he retired following the end of the Chicago Bulls’ third consecutive championship victory.

Michael’s retirement was short lived and like his retirement, so was his absence from the All-Star festivities. In his first full season of basketball following retirement, Michael made his tenth starting appearance and would take home the MVP after scoring 20 points in 22 minutes of play. He’d win his last MVP in New York City against a young Kobe Bryant and would play his last All-Star Game overall in 2003 which would have ended perfectly if not for a Jermaine O’Neal foul. In addition to three MVP awards in 13 All-Star appearances, Michael averaged 20.1 points, 4.6 rebounds and 4.3 assists per contest. Although Jordan won’t be on the court this weekend in Orlando, his influence will be there as players who looked up to him growing up will take their turn at All-Star greatness.